Whenever we fill out forms, we usually encounter abbreviations and words that we think we know the meaning of but are not really familiar with the correct usage. For instance, certain terms like “apt” and “suite” are just some of the words we often encounter and yet some people are still having confusion on how to properly use them in various contexts.

So what does apt/suite mean in address context? Do these words refer to the same thing? And when should we use these terms? Stick around as we’ll talk more about these things in today’s post.

The word ‘apt’ is an abbreviation for the word “apartment”. And as we all know, an apartment is a collection of rooms that comprises a single residence typically found in a single building or complex. And the word ‘apt’ is just the shortened form of apartment to denote a single unit on a suite of rooms in a particular dwelling.

In terms of address, apt can also refer to the number of a certain apartment in the building. And it helps pinpoint a specific location, which is typically common for residences when more than 1 person is sharing the same address.

When Should ‘Apt’ Be Used?

The ‘apt’ abbreviation is often found in forms, real estate listings, and postal addressing. Likewise, you can also see this shorthand version of the word in posted signs for an apartment rental, newspaper ads, and addressed envelopes. And whenever you’re writing an address outside an envelope, you can shorten the word “apartment” to this abbreviation. As for writing your address in the address description, it is recommended to capitalize the first letter of the abbreviation, for example: “40 St. Jude Street, Apt 20…” and so on. And the all-caps version of this abbreviation (APT) is used as a secondary address designator for the United States Postal Service.

In addition, the abbreviation and the term “apt number” mean the same thing, only that the term is often used to identify the numeral identification of a specific apartment room. For instance, if a residential compound has 5 buildings and each building has 10 apartment rooms, then a single building is labeled alphabetically (A to E), and the apartment for each building is marked with a number from 1 to 10 for easy location and recognition.

Anything outside these things will often use the not abbreviated version of the word, or the word ‘apartment’ is used as is in general prose.

The Word “Suite” Defined And Its Proper Usage 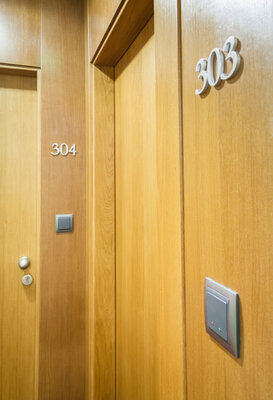 The word “suite” in the address context refers to a collection of rooms within a particular building or structure. Basically, it has the same meaning as the word “apartment”, but its usage varies based on the type of building it is pertaining to and the country where the word is commonly used. For instance, if a person is residing in a townhouse, it is more appropriate to use this word in referring to a room than the word “apartment”.

However, the word can also be used sometimes to indicate a set of apartments within a residence. Aside from that, it can also denote the number of a particular apartment similar to how “apt number” is being used as mentioned above. And in some cases, a suite can also be used to point out a specific location of an office or business within a commercial establishment like an office building or shopping mall.

As for filling up forms, the word is also capitalized in the address description the same way as the abbreviation ‘apt’ is supposed to be written. Furthermore, some mail drop or CMRA may also assign the ‘suite’ designation to specify a company or business’ P.O. Box, though sometimes discouraged by the USPIS or Postal Police to prevent mail fraud.

In the United States, the word can be abbreviated as ‘STE’ so US Postal Service can easily identify it as a postal address.

The word ‘suite’ may have the same pronunciation as the word “sweet”, but its meaning is certainly different.

How Do ‘Apt’ And ‘Suite” Are Used In Different Countries?

As previously mentioned, the words ‘apt’ and ‘suite’ may vary as to how they are used in different countries. To be specific, ‘apt’ in British English is used to refer to an apartment the same way as ‘suite’ in the US in terms of conversational talking. And while both terms mean a separate room or apartment, their synonymy can be further explained here.

When you say “apartment” in American English, you are really saying a room or space that has only one door and entrance. Now this may seem like an obvious example, the word has a completely different meaning in Canada and Australia than it does in the United States. In most countries mentioned here. A room or space that has only one entrance and the door is considered a suite or single dwelling. When it comes to apartment in our country, it usually refers to a building that has more than one floor and it is split into units.

And when talking about B&B and public accommodation businesses like hotels, a room can also be called a suite here in our country and most countries in Europe. And oftentimes, the suite it’s referring to is a big hotel room with lots of separate rooms and lavish amenities inside such as the Presidential Suite, Penthouse Suite, and other types of luxury hotel rooms.

Overall, ‘apt’ and ‘suite’ are words used to pinpoint certain locations of rooms and spaces within a building or complex. And while they mean the same thing, their usage may differ in certain instances according to the type of building it’s referring to as well as how the words are used during conversations in most English-speaking countries.

And abbreviating the words “apartment” and “suite” into ‘apt’ and ‘ste’ is also done to help you shorten your address when filling up forms and to help the postal service identify your address easily using their all-caps form.